‘Scuse Me While I Kiss The Sky 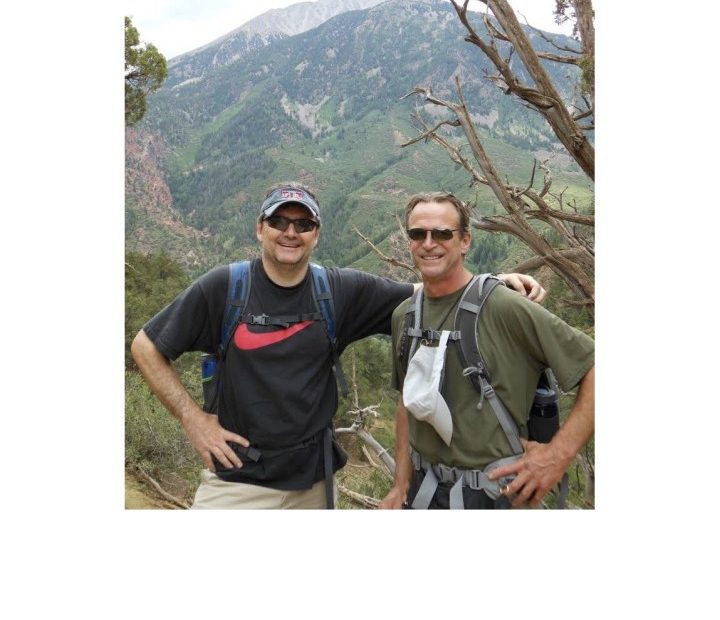 The Weminuche Wilderness. 500,000 acres of pristine land in Colorado, roughly the size of the state of Rhode Island.

I was on top of it, standing 12,688 feet above sea level on Table Mountain, staring slack jawed at a herd of elk in a valley below.

Why was I there? Because I followed my brother-in-law Paul up the Highline Trail on a crystal clear July day, soaking in unobstructed 360 degree views that stretched for 90 miles.

Was I fully alive at that moment? Damn right I was, but then again, that’s how Paul made you feel. Forget about the vista.

When I met Paul at the Durango airport the day before we set off, he told me he’d packed my gear, all 50 pounds of it. After thanking him, he told me to unpack the gear and repack it myself. Why? So I would know where everything was in case we encountered what he called “difficulties.”

In all candor, up to that point I had never spent a night in the wild, but Paul dismissed this fact with a wave of his hand, telling me I was “in shape” and had “the right attitude.”

Paul had invited me into one of his many cathedrals in the sky, places where he routinely found peace in good times and solace in turbulent times. Places where he could kiss the sky. And places where he was the happiest because he was usually alone.

Tolstoy said “it’s a bad thing not to be able to stand solitude.” Paul loved his solitude, which he was about to graciously share with me.

We journeyed into the Weminuche with no watches, no phones, no technology, and no contact with the outside world. Hiked all day, made camp, then repeated the sequence the next morning. All without “difficulties.”

The first time I had really, truly kissed the sky.

We emerged three days later, cleaned ourselves up and headed to the little mining town of Creede for bison burgers and a few cold beers at Kip’s Grill. A just reward in a cool place completely lost in time.

Was I fully alive during this whole experience? Unconditionally, but then again, that’s how Paul made you feel. Regardless, again, of the setting.

A song about doing it all is “I Lived” by OneRepublic…”I owned every second that this world could give. I saw so many places, the things that I did. With every broken bone, I swear I lived.”

And that sums up Paul. He owned every second the world could give.

After hearing Walt speak a few years back, I devoured the book and thought to myself, “how did Walt write about Paul’s life having never met him?” I recently reconnected with Walt and looked to re-read his book. I had forgotten that years ago, I mailed my copy to Paul with a note that said “here’s your biography.”

Paul disappeared without a trace while hiking six years ago. Sadly, he went missing the very week my mother passed away, so it was the quintessential “double whammy.”

The mystery of his disappearance remains, but his legacy endures. He lived on the edge, and he lived a life that mattered.

If I were to choose an epitaph for his tombstone, I would simply elect two words: “I Lived.”

I try to own every second that this world can give. And yeah, I have unrepentantly broken bones along the way.

Run an ultra on a whim, four weeks after finishing yet another marathon? Sounds good.

Bike a century with 7,000 vertical and a heat index over 100 degrees? Even better.

Enter a 5k with my oldest daughter on a bet and a gimpy hip and both win our respective age groups? Why not.

Take an awesome, last minute hiking vacation with my family in 2019 because “we don’t know what 2020 will bring”? No doubt.

It fits how I want to live my life, and it is a fitting tribute to Paul. A double whammy, but a good one.

Can you swear you lived?